Hooray! NarraFirma has leveled up again, to version 1.2.0. This new version was funded (in part) by several paid commissions, to add things people needed in their projects. Our thanks to everyone who contributed. NarraFirma is getting better for everybody!

Here are instructions for installing or upgrading NarraFirma.

The changes in NarraFirma 1.2.0 are in four areas: better catalysis reports and story cards; better support for importing data collected in other surveying systems; better housekeeping options; and usability improvements.

In this example, only stories for which the question “Feel about” was answered “satisfied” or “supported” will be included.

A4. Better graphs. You can now save catalysis report graphs in SVG format. This means: 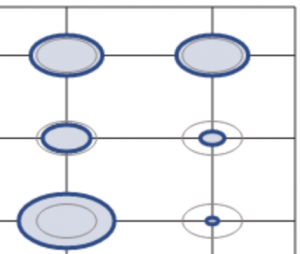 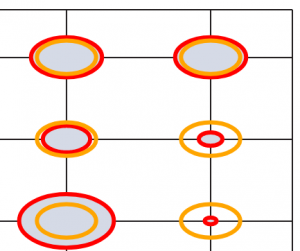 In the SVG version, note the increased sharpness, and the ability to change the graph colors.

A5. Copy selected story texts. There is a new button on the Explore patterns page. It opens a window with just the texts of the selected stories in a graph, so you can copy and paste them elsewhere.

A6. Question and answer CSS classes. In story cards, individual question names, and their answers, now have their own classes. So you can style them separately, for example to make particular questions or answers “jump out” when people are looking over story cards.

This is an ugly example, but I was trying to show you how you can change the appearance of everything now, even the commas between choices and the little bars on the slider.

Here’s an example of a multi-histogram display before, with every graph included: 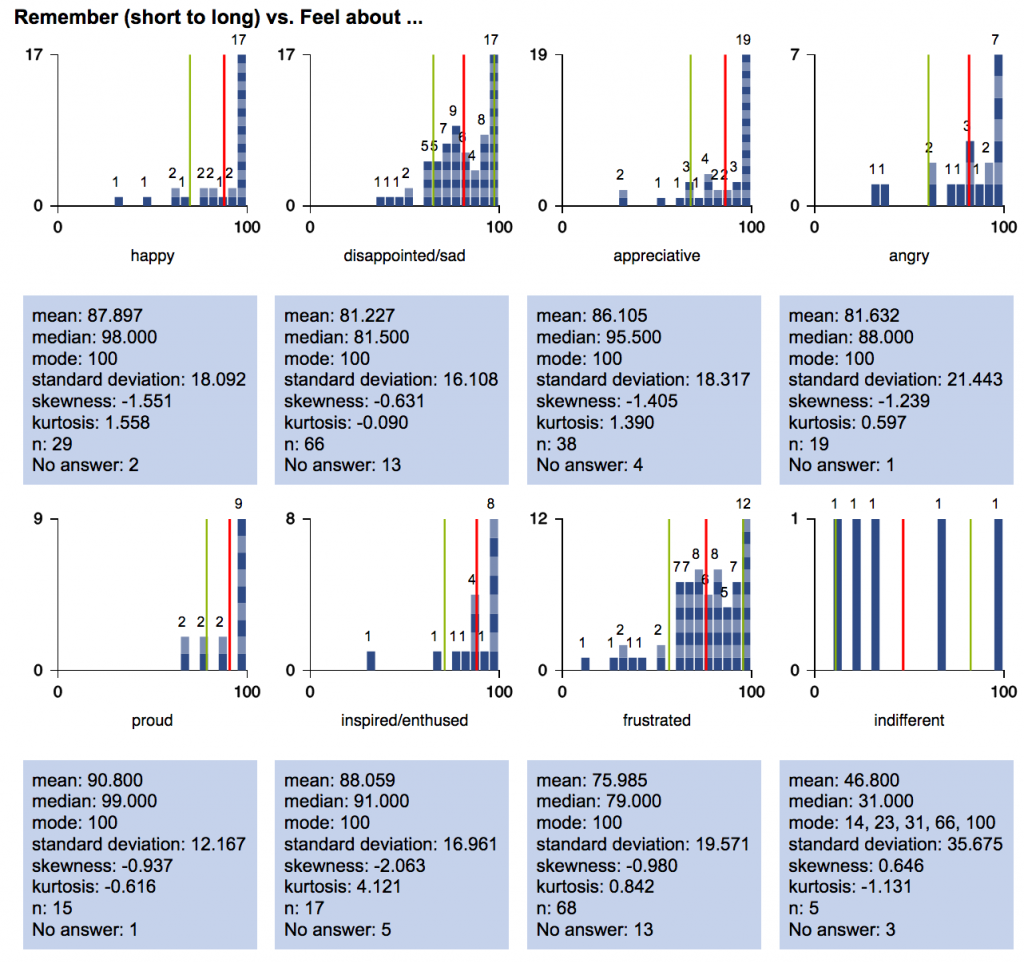 And here are graphs for the same question with the minimum story limit set to 20:

A8. Story length question. NarraFirma now generates a question showing story length (in characters). I wanted to do this a long time ago, but I wasn’t sure how to handle the upper limits, because story length can vary so widely. But I finally added the question. It acts just like a question you asked, and you can see patterns in how it combines with other things. 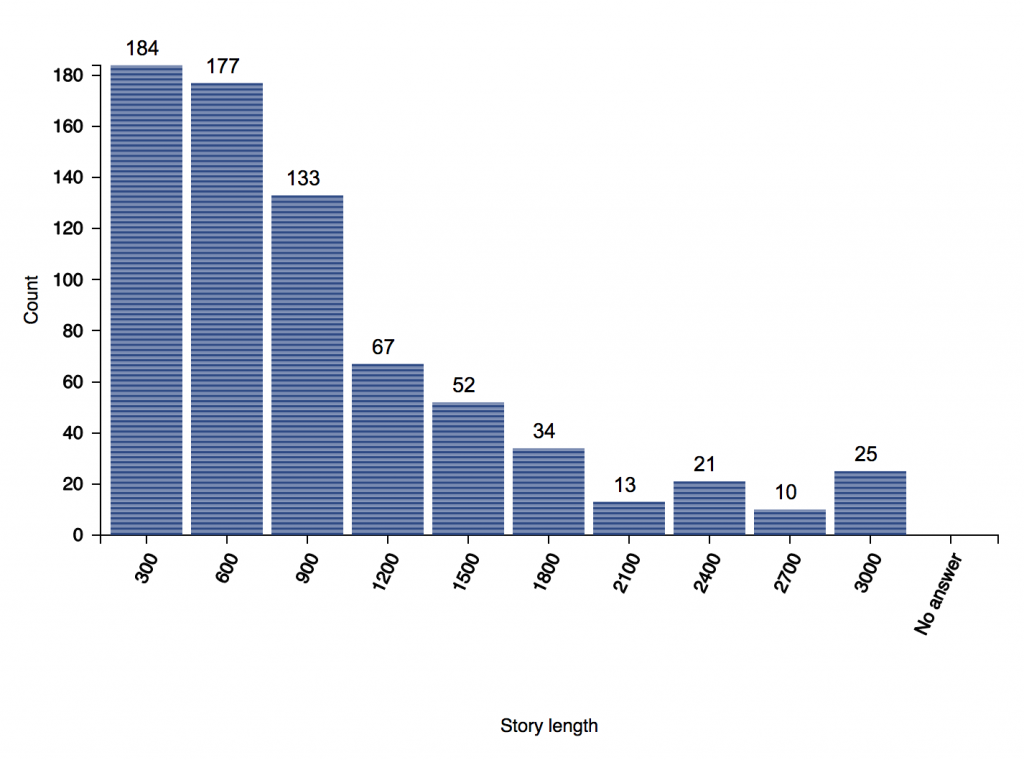 On the “Spot-check graphs” page, there is a hard-coded maximum of 5000 characters counted (before the rest pile up in the last bin). In the catalysis report, you can choose your own maximum based on the story lengths you have. In this example, the last bin (2700 to 3000 characters) also includes stories with more than 3000 characters.

A9. Choice x choice x scale graphs. This new graph type was suggested by a NarraFirma user, and I have to say I was amazed to realize that I had never even thought of building such a graph before. I’m calling it a “contingency-histogram table,” and it looks like this. 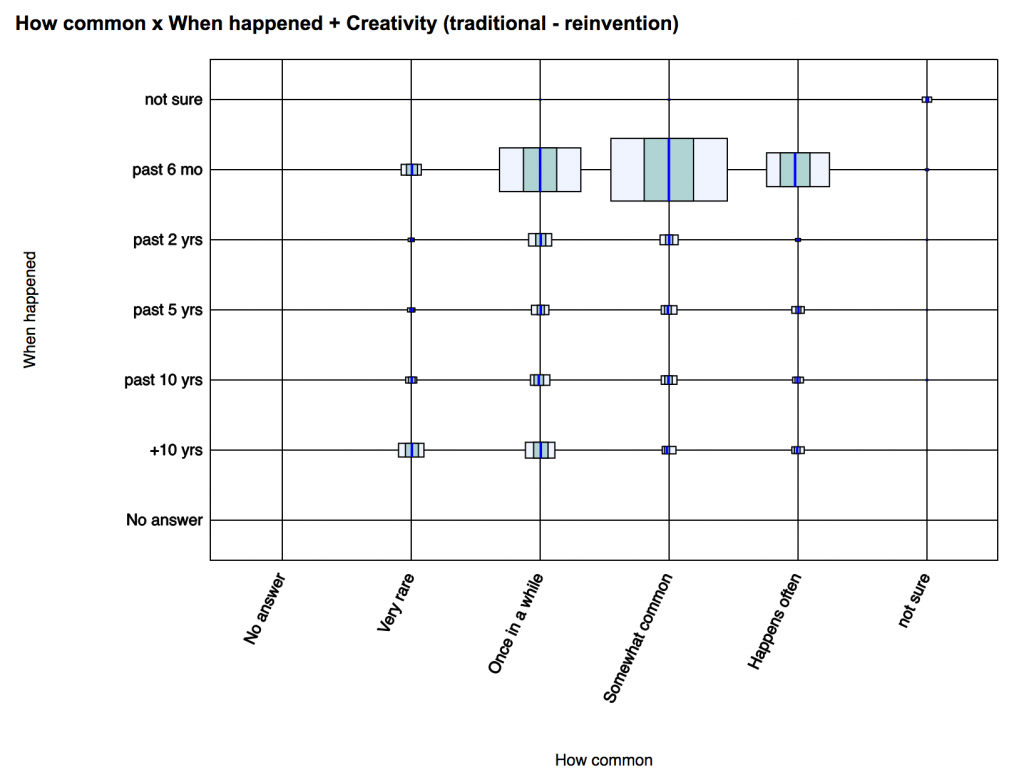 The size of the boxes shows the (relative) number of stories, and the boxes are overlaid (in the horizontal dimension only) with the mean (the blue line) and the standard deviation (the aqua box) of the scale-question distribution. You can compare the distributions of subsets (e.g., sad stories about trust versus happy stories about traffic) by looking at how the different means are displaced this way or that. You can also hover your mouse over each distribution to see its mean, standard deviation, skewness, and kurtosis.

And there are statistical results: the Mann-Whitney U test for differences between means (the same one you see when you do a choice x scale comparison).

In this example, when somebody said a story was both common and recent, they were more likely to say the story showed “traditional” thinking than when they said the story was rarer and further in the past. This may or may not mean anything, of course – beware of equating statistical significance with actual importance! – but it could be a pattern that worth exploring (by comparing subsets of stories).

The only bad thing about this new type of graph is that you can now generate a really huge number of graphs if you select all of the available graph types at once. Depending on how many stories and questions you have, you could end up with a pretty long wait on the Explore patterns page. However, if you turn on the different graph types one at a time, you should be fine.

B. Better support for importing data collected in other surveying systems

B2. More CSV data types. The import system in NarraFirma has been expanded to accommodate a wider variety of CSV data formats, including:

B3. More import options. In most cases, you will no longer need to edit the CSV file you saved from the surveying system you like best. For example:

B4. Pre-import data check. You can now run a verbose pre-import check of your CSV file that will tell you exactly what NarraFirma read correctly and incorrectly, before you import any stories. This will be a boon to people who have been importing stories over and over to get their import formats and settings right. The log appears in your browser console, and it tells you in which row and column errors are detected, so you can fix import problems more easily.

B5. Data consolidation. You can use the import function to consolidate data, that is, to merge similar answers. This is useful in situations where your numbers are too small, but if you added them up you might see some patterns. To consolidate answers, just use the same names for both answers during import, and NarraFirma will count the answers together.

In this example, putting “respect and trust” in the list twice, once for “respect” and once for “trust,” will combine the answers into one larger category. Note that this does change your data during import, and you can’t take such consolidated answers apart again. But in many cases this option will help you convert weak patterns into stronger ones. (If you entered your data in NarraFirma, you can export it and import it again to consolidate it.)

B6. More explanation than you could possibly want. I have written an 18-page “Guide to importing data,” which goes into exhaustive detail, with examples, on the import process. 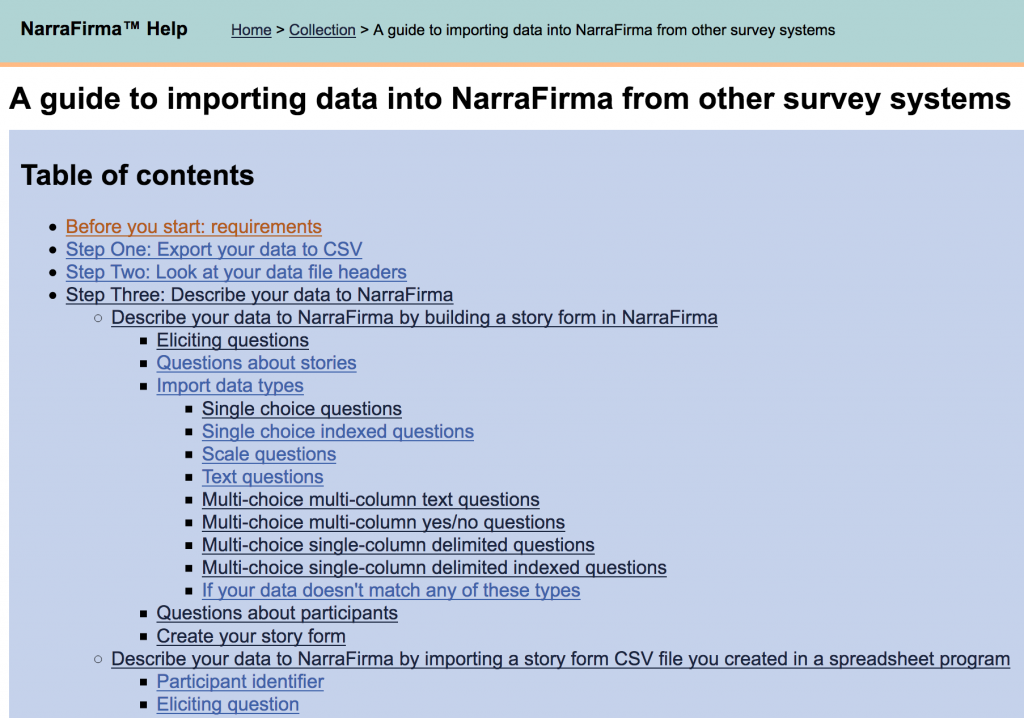 C1. Project reset. You can now empty out a project completely. Why would you want to do this? Because now, when you export a project to a JSON backup file, NarraFirma strips out any stories that were left disconnected (but not deleted) when their story collection was deleted. So if you have been importing the same CSV data file over and over (which you should no longer have to do, but still), you can export the project, reset it, and re-import it, and that will clear out any intermediate stories that didn’t load perfectly.

Note that only project administrators can use the reset facility. Importing projects has been restricted to the administrator role as well.

You can also get a list of all the story collections you deleted, so you can get your stories back again if you deleted them accidentally. (We really don’t like the idea of you losing your stories.)

C2. Project archiving. In the node.js version of NarraFirma, you can now archive a project. This actually just renames the project folder with a dot in front of it, which causes NarraFirma to ignore it, and you could have done that by hand before; but it’s easier now.

D1. Quick links. The NarraFirma home page now has a list of quick links to things you created in the project: questions, forms, reports. 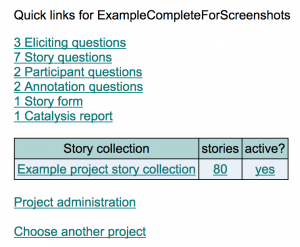 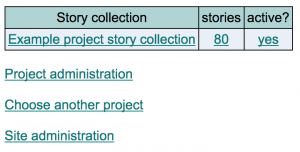 D3. Nicer admin pages. The design and organization of the site administration pages have been improved in both the node.js and WordPress versions. Here’s the new node.js page: 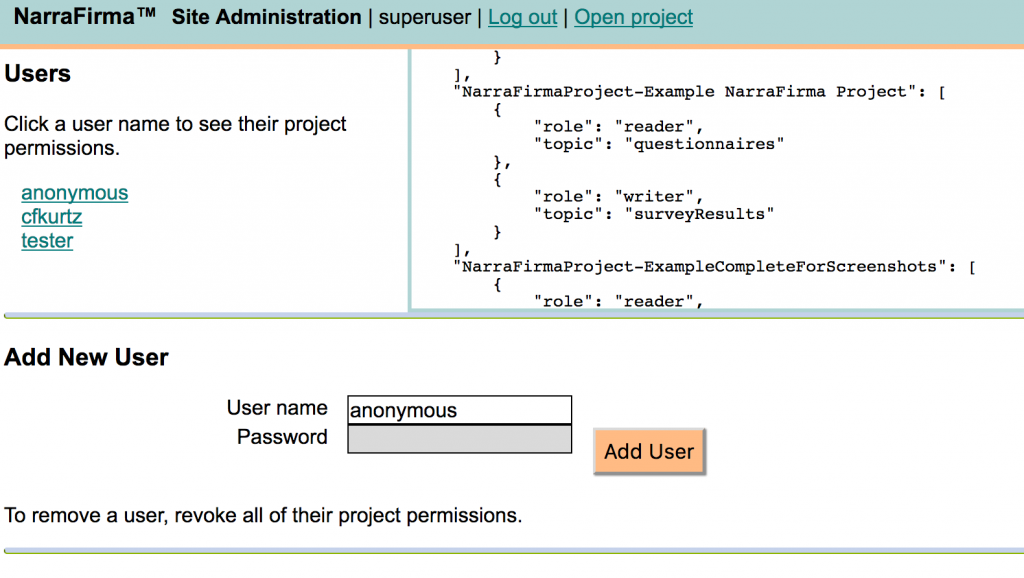 D4. Better descriptions of graph types. I’ve improved the way graph types are listed, so it’s easier to see how graphs are derived from questions, and why you’d want to see each type of graph. 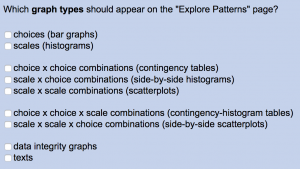 I stress tested the software with an imported file of 13,000 stories (actually a 1600-story file copied and pasted seven more times). I wasn’t sure what would happen, but NarraFirma worked perfectly, although very slowly (a few page loads were more than a minute; most responses to button presses were 1-2 seconds). If you are working with large numbers of stories, you might have to increase the memory available to NarraFirma (in node.js, increase the Javascript heap limit; in WordPress, increase the PHP memory limit). Also, I would suggest making subset projects if you collect more than 10,000 stories, just to keep within the limits of your own patience. But in terms of the software handling large numbers of stories, it works.

I found and fixed a number of small bugs as I worked. There are probably only two bugs that anybody noticed:

All the other bugs I found were not very important, just spurious error messages or little things that looked less than beautiful.

If you find a bug in the new version of NarraFirma, please send me an email or create a new issue on the GitHub issues page.

The next time I take the plunge into NarraFirma development, these are some of the things I am interested in working on.

If there is anything you would like to see in NarraFirma’s future, please let me know. I charge half my normal consulting rate for software commissions (though I do usually let commissions bunch up until I get enough to plunge into the software for a month or two, because it takes a while to get my bearings). I very much want to keep NarraFirma alive, relevant, and useful. Again, my thanks to everyone who helped out with the new version.