I would have put more changes into this release, but I wanted to release a WordPress version that updated the “tested up to” WordPress version. NarraFirma is not much affected by WordPress update changes, since it only uses the platform as a database back-end. However, I wanted to show WordPress users that NF should still work well for them.

The changes in this release are as follows.

You can now specify a maximum number of answers participants can choose on multi-choice (checkboxes) survey questions.

When a survey-taker checks the maximum number of boxes (two in this example), the other checkboxes become disabled. If they uncheck a checkbox, the other checkboxes become enabled again. I implemented this feature in this low-key way because I hate it when surveys scold me (by popping up a message or turning everything red) for not knowing that I am checking too many options.

To avoid people becoming confused when checkboxes gray out, there is a new story-form field where you can specify what the survey should say on a question with a max-answers limit. By default (if you specify nothing), the story form will say “(Please choose up to # answers.)” after the question text.

I moved the labels on the contingency table graph to the upper right-hand corner. They look better there, and they take up less space. 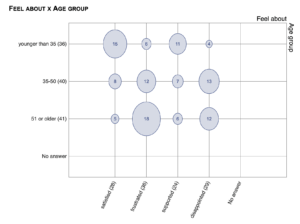 I also removed the X axis label from bar graphs. It was redundant, since it was the same as the name above the graph, and it also took up space.

I took a quick look at accessibility in the NarraFirma survey form and made these changes to improve it.

As always, you can submit bug reports and feature requests via the GitHub issues page. And if you are using NarraFirma, feel free to reach out and tell me (cfkurtz@cfkurtz.com) what you have been doing with it and what you would like to see happen in this next development pulse.